Domain: West Alliance
Location: West coast of Morendor, central shoreline of Nuas Baruanah (big water bay), north of Mepheras Melaeth (wildhorse grasslands).
Description: A large, walled in city on the shore of (big water bay). There are gates and guard towers at each entrance of the city, east, north, and south. There are also towers approximately every two miles built into the wall. The walls are 20 feet high, and the towers are 30 feet high with archery slots. The guard towers are always manned while the perimeter towers are only manned when the city is threatened by war.

Named Hawker's Fort until just recently after its many markets; the High King has once again reclaimed the name Castlegaurd, as it was originally named for its walls and great fortress. At the center of the city is Tyr Cadarn palace, where the king of An Morendor and Westguard resides and handles affairs of domain. The King's name is Artorius Xavier; His Dumarc is Valis Urik; and His Steward is Krynfel Heldras.

There is a wide street, called Calvary Lane, which is five and a half miles long, and an eighth of a mile wide in a three mile long stretch, where warriors parade on horses before battle or allied camps are set up. Tournaments and Festivals are held on Calvary Lane as well. The knights of the King and the Westguard Alliance are called the Castellarn Knights. This citadel and its kingdom alike are inhabited my immortal and mortal races alike, and the tolerance between them is sometimes tenuous therefore conflicts do arise. Many of the mortals in this city do not trust immortal kinds and many who do not command magic distrust mages.

Just inside the palace bastion past the gate, to the left of the road which leads from the gate to the palace, is a high tower called Sulmorda, Tower of the Arcane, which is where the city's high mages reside. Also within these walls in the highest chamber the arch mage Argal is held prisoner for a crime many believe should have earned him death.

City Prison: The Prison has high level security wards. It is subterranean and covers a great deal of ground beneath and around the palace and its grounds, but is entered from outside the palace ramparts through the keep of the Prison office just east of the palace. The prison has four levels. The wards prevent unwanted entry by arcane or physical means and escapes by any means. The use of magic by prisoners is stripped by wards as is telepathy to and from them. These wards are necessary to prevent powerful immortals from breaking in or escaping. As wards can be weakened or overpowered by more powerful magic wielders, escapes have occured, though they are very rare.

Castlegaurd Festivals: There are four festivals a year in Castlegaurd, which people come to from miles around.

Harvest Fest: Takes place in the 7th Month (Celuir), in autumn. The festival lasts 16 days. There are tournaments, plays, bon fires, fresh produce vendors, and general celebration during this festival. It takes place in Calvary Square.

Summer Festival: Takes place in the 2nd Month (Bolgdeaneg), in summer. It celebrates the sun and rain. The festival lasts 12 days (two weeks). There is dancing, drinking, bon fires, swimming, and games of all kinds, including Contests of Prowess for warriors. It takes place at River Park.

Autumn Festival: Takes place in the 4th Month (Baeliceg), in early autumn. It celebrates victory and the courage all of those who died to protect their kingdoms. The festival lasts 6 days (one week). Celebrated warriors from all around are challenged to all kinds of contests of wits and skill during this festival, including drinking contests! Anyone is welcome to challenge the warriors who participate. It takes place in Calvary Square. This is also the day that any citizens of Castlegaurd and its domain, who wish to denounce the King of the City, may gather beneath the large festival tent set up on the grounds, and state their grievances to the Castellarn knights, on the morning of the 6th day. If the people have a valid cause to dethrone the King, and more speak against him than for him, than the King stands down and passes his throne to his heir or steward. 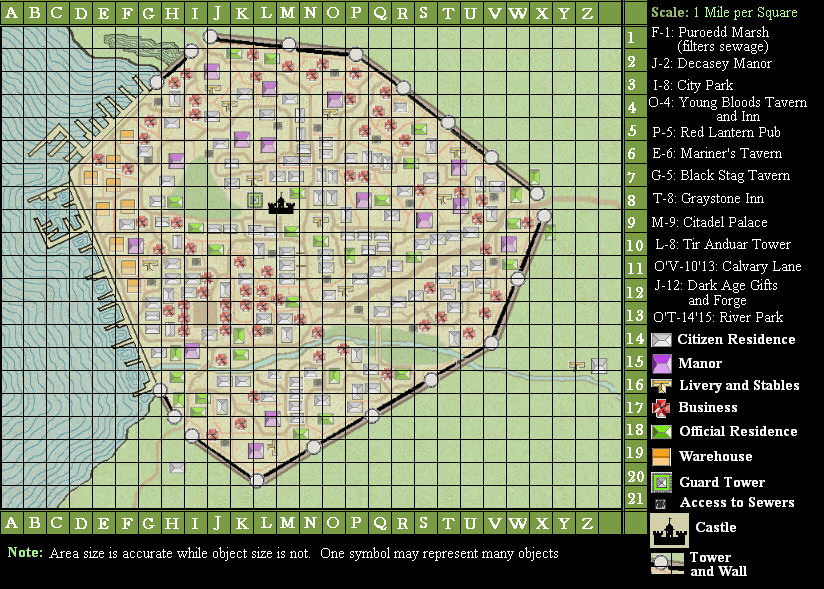 There are taverns, inns, livery stables, markets for all kinds of food, fresh sea food markets overlooking, or on the wharves, metal smiths, book makers, etc. Most of the places listed below are hiring.

Dark Age Gifts: (H-13 on map) Owned and Operated by Marco Alexander. He sells, trades, buys and repairs medieval weapons of all kinds, and has an excellent armor and swordsmith working for him named Vincent Abraccia. He also sells books, camping supplies, lanterns, candles, polishes stones, furniture, and all sorts of odds and ends, including magic items, which he keeps hidden in a warded vault. His blood kin Ray assists him in keeping shop. The hours are midday to midnight, Monday-Thursday, and if he has nothing better to do, he works fridays and saturdays as well.

Young Bloods Tavern and Inn: (N-4 on map) Owned and operated by Matthew, Kent, Kelly, and Mickey of the Noct'maire Clan. Also working there is Candy, Favor, Miles Morgath, Miris Haelen, and Gephron Styles. This large manor turned Inn and Tavern caters to those who like to have a good time, and to meat eaters and blood drinkers. They serve blood and meat from well cared for livestock that is raised outside of the city on Gephon's estate. They also serve good, hot food, as well as alcoholic beverages for all kinds of people. For those who want to fight, the basement has a large sparring room, where they allow people to settle their differences, or just fight for kicks, with a very strict 'no kill' rule. If anyone gets killed, the city guards are called. Kent attained permission to run this Inn by convincing Prince Heldras (who in turn convinced his father) that it would assist in cutting down on 'unsolved' crimes to have a tavern where hungry vampires and demons could eat without killing anyone. Young Bloods Tavern has a very gothic atmosphere. Rooms are $80 a night. Stabling horses is $20 a night, $40 for a full day. Warm Blood is $8 a goblet, bottled is $5. Two hours with a Blood Serf is $500, or $60 per half-hour. All of the Inn's blood serfs sell their blood voluntarily, have safe blood, and none of them are human. Wine is $10 a goblet for fine wine, $5 for local. Ale, Mead, and Beer are $3 a tankard, and Stouts and Lagers are $6 a tankard. All brew is on tap. Liquor prices vary, and start at $10 a tankard, and $5 a shot. Dinners are $10, and Lunches and Breakfast are $6. Water, Coffee, and or Fresh Pressed Juice (types available) are free with any meal. No children are allowed in this Tavern. Ages 18 and up only may enter.

Behind Young Bloods Tavern is a shop owned and run by Kent Kavannagh. Called Kent's Emporium; this carriage house turned clothing shop, is the place for anyone who loves quality leather and cloth clothing, footwear, accessories and even makeup accented with 'gothic and punk' styles that are 'out of this world' quite literally. Kent's designs are also 'medieval' enough to blend in with the natives, and make them quite badass in appearance all the same. His shop and goods have become all the rage with young people the world over. He does as much business in imports as he does nation wide.

In the basement of Young Blood's Tavern is a tatoo shop which is the place for anyone who wants their skin inked by a master tatoo artist, which both Kelly and Favor are. Kelly's tatoos are the best in all Morashtar, both in artistry, application and customer satisfaction. Kelly not only applies amazing tatoos, but gives out excellent advice concering what kind of tatoos a customer may choose. The one kind of tatoo Kelly refuses to ink on someone are 'personal tatoos' such as girlfriend, boyfriend or even family members' names or images. He will send customers elsewhere before giving them that kind of tatoo. He also advises against religious tatoos, although he will ink them, simply because they can be so 'cool' to look at. 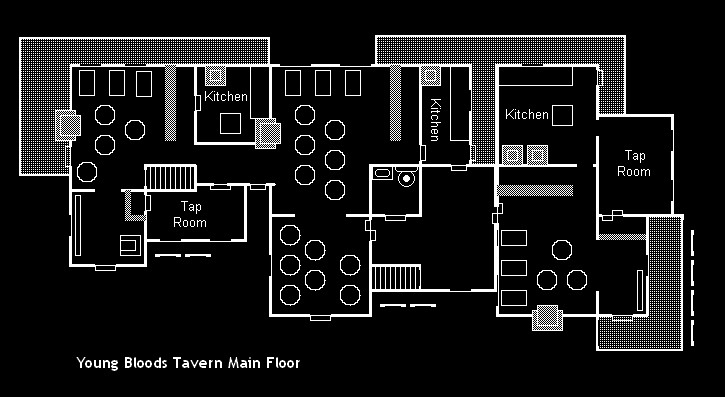 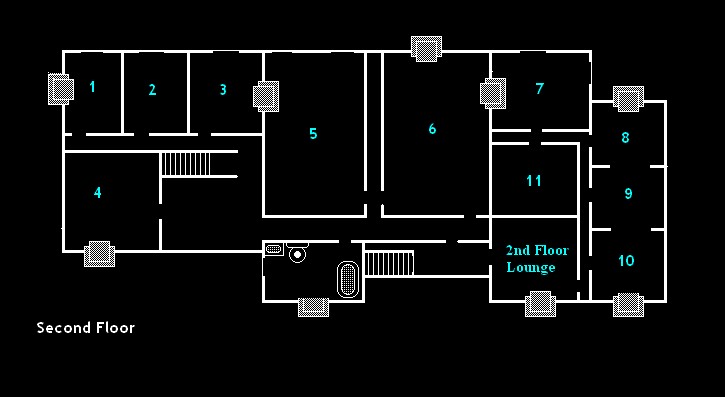 Information: An elderly man and woman (Joseph and Marie Boyer) currently own the tavern, with hopes of finding a buyer who can afford to keep it running. The place was all oak and hand carved, but there were nice stone inlays on the bar and along the tables and booths. All center pieces are simple candles with holders. Nothing too ornate. The couple was proud of the place they had created. One to two bar tenders work at the same time, with one cook. Tavern is located off of Calvary Lane, 2 miles from the East Gate. Address is B-3 Calvary Lane.

Mariners Tavern: (F-11 on map) Owned by Braedo Cardan. This rowdy tavern with its oak bars, tables and chairs, is where sailors spend their time between journeys at sea. Loose women, and whores frequent this place with plenty of love for any man who is willing to pay for a good time. The food is hot, the place often filled with raucous singing, drunkards, and cups spill over with grog, mead, rum, and strong ale.

Graystone Inn: (S-9 on map) Owned by Gwyneth and Eithin Gogan. A well kept Inn made of stone with clean, decent rooms, and excellent care of horses which patrons and citizens alike stable at their livery. They serve excellent food and drinks, and their service is friendly and commendable. The eatery in the Inn has a very pleasant and comfortable atmosphere, with a great hearth, sofa, and chairs as well as tables and private booths. $150 a night, $500 a month, includes meals and drinks. $250 a night includes livery. $250 a month livery per horse, includes feed, hot walking, mucking stall, shoing and grooming horse. Waiters: Mani Hauden, Levi Jeshuai, Jessi Lampton, and Gillium (Gilly) Norvan.

Red Latern Pub: (K-12 on map) Owned and operated by Caib Darogan, and Elbeth Darogan. A decent pub with a pleasant atmosphere where many sorts go to relax and have a good time. The Castellarn Knights often go to the Red Latern to drink, relax, and talk. It is open from sunset to sunrise.

Black Stag Tavern: (F-5 North on map) Owned by Felix and operated by Crevan Telori and his son Trirdan, whose residence is on the same property as their tavern. Thieves and other sly sorts tend to hang out at this tavern, although others go there as well. Crevan minds his own business as long as his customers pay and do not bother other patrons. The owner Felix is often found there minding his own business as well, unless he sees something going which even he does not want in his place. Candles and braziers light the Inn, and the wood paneling its walls are dark, as is the wood the tables and chairs are made of, giving the place a gloomy atmosphere. It is open from 6:PM until 4:AM.